To use a popular expression, Paul Echevarría is definitely on “cloud 9.” And it so happens that his current state of elation is, at least metaphorically, related to the cumulonimbus he seems to be on.

A seasoned sales and marketing professional with vast experience in the information technology (IT) and communications industries, Echevarría was recently tapped as Regional Channel Sales Director Latin America to lead an incursion into a region he’s well acquainted with and where he has developed an enviable network of contacts and affiliations for one of the fastest growing, most exciting tech firms in South Florida and across the country.

the ‘bentley of cloud services’

WHOA.com rapidly established itself as a leading next generation provider of enterprise-class, secure cloud computing solutions for businesses throughout Florida and the United States. The Broward County-based company, led by a team of seasoned IT experts and entrepreneurs, has structured the firm —from its technological, infrastructure, financial and human resources, to its professional and managed service offerings— to surpass industry standards regarding performance excellence in order to meet a virtually explosive level of growth.

From the get-go, WHOA.com’s founding members, with Chairman and CEO Mark Amarant at the helm, had a clear vision for the company and most importantly, a well-defined “flight plan” on how to achieve it.

Privacy, security, geographic redundancy and other similar terms frequently used in cloud computing to describe services and guarantees, yet not always fulfilled by companies taking advantage of the “rush to the cloud” movement, became an integral part of WHOA.com’s offerings. By establishing synergistic alliances and strategic affiliations with some of the world’s leading software developers and top-tier computer and communications systems manufacturers —like ScienceLogic, Palo Alto Networks, NetApp, Citrix, Cisco, and Microsoft—, WHOA.com succeeded in creating, as Amarant describes it,  the “Bentley of Cloud Services.”

The company’s crowning glory to date has been achieving its ISO 27001 certification, a rigorous process in which security controls are tested, scrutinized, and accredited as meeting the highest standards in the industry. To retain this certification, the company must demonstrate that it can progressively meet the higher levels the industry sets as it expands and innovates —and the corporate cloud computing client will demand as it develops its systems accordingly. 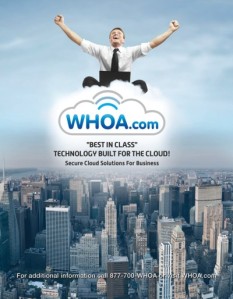 The WHOA.com cloud platform adheres to the Data Protection Act of 1998 and fulfills all the requirements for HIPAA (Health Insurance Portability and Accountability Act) and FIPS (Federal Information Processing Standards) compliance.

Marketing WHOA.com’s cloud platform, commitment to excellence and top notch customer service to prospective clients in Latin America is Paul Echevarría’s main responsibility and he is more than “up to the task.”

A Puerto Rican native who arrived in Miami in 1990, he honed his skills at an early age as part of the leadership of the “Young Entrepreneurs,” a development and training program hosted by the island nation’s powerful Chamber of Commerce. It proved to be an invaluable experience.

“Working in Puerto Rico gave me the entrepreneurial skills and the international contacts in the Caribbean and other markets, as well as in the technology industry.”

“I opened my own company, TSI (Technology Supply International), in 1999, with an ex-partner. We supplied toner and equipment to all of Latin America.”

“Because of that, I’ve created and nourished relationships, and more than that, I am ‘family’ with people who happen to be key players, leaders and role developers in this market. When you’re looking to partner up, you’re looking for someone ethical, who is respected, who is known and above all, who is the right solution for your business.”

“I am a people person,” Echevarría declares. “I love the handshake. My Dad is my mentor, my role model. My Dad to me is a strong Christian man of his word. And when he looks into your eyes and says: ‘Son, you said ‘this’. I don’t care if tomorrow you lose 25 cents because of it. The fact that you gave your word, that’s it. Figure out how you’re going to make up for those 25 cents, cause you owe 25 cents.’ That is huge. When I shake a hand and say that I’ll help you out, I’ll help you out with no strings attached. This has opened doors for me. When I call someone, they pick up the phone.”

And because Echeverría has such rapport with his contacts and gets things done, business relations and friends call him “the key to Miami.”

While he admits he doesn’t know “everyone,” Paul says his acquaintances will gladly do a “warm intro” to a third party he’s trying to contact: “When you do business with friends, it’s different. They like you and trust you; they know you deliver, so they open doors for you.”

Business across Latin America, he asserts, depends greatly on the comfort level between the two parties. His years of travels in the region have enabled him to learn local accents and customs that make him less of an outsider and an effective negotiator.

As Chester Karrass, an author and motivational speaker Paul admires, says: “In business as in life, you don’t get what you deserve. You get what you negotiate.”

2 thoughts on “Whoa.com’s Paul Echevarría Aims To Take Firm’s Cloud Solutions To The Hemisphere And Beyond”